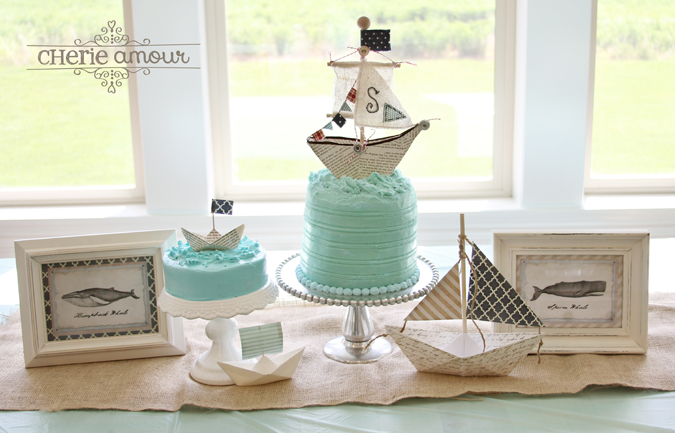 The cool vintage whales were digital art that I purchased from THIS etsy shop.  LOVE her stuff.  I just printed them off my home computer unto some nice card stock, backed them with some decorative scrap paper and put them in some 5x7 frames. 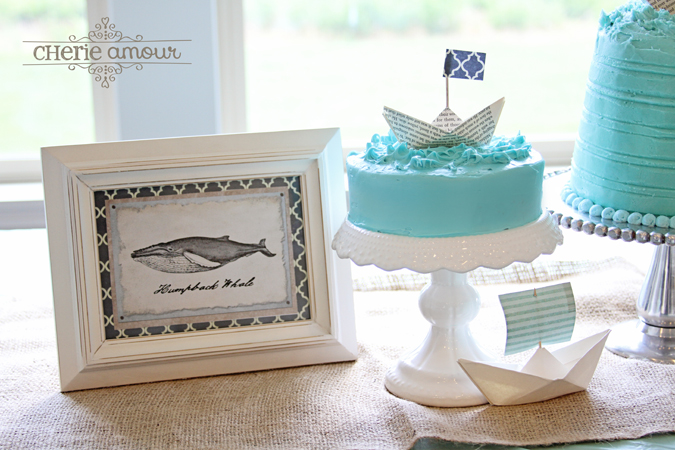 The paper sail boats I folded myself, stuck a dowel in the larger one, and a toothpick in the smaller one for the smash cake, and the sails are just folded paper glued to some jute string. 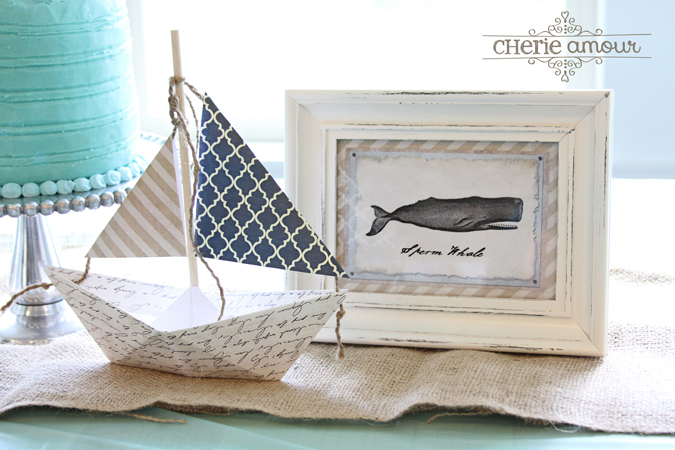 Cake inspiration was found HERE.  I made my own sail boat using a cereal box (my sister drew out and cut the shape out of the cardboard, and taped it all together for me.)  I then mod podged paper from an old book onto it and painted the edges, and added buttons.  I hot glued some small dowels together and cut out the sails and flags from fabric.  I hand stitched the "S" and other details.  So the wet frosting wouldn't ruin this boat, I covered the bottom with plastic wrap before placing it on the cake.  (I wanted to display it in my baby boy's room when the party was over, because this boat took some work.) 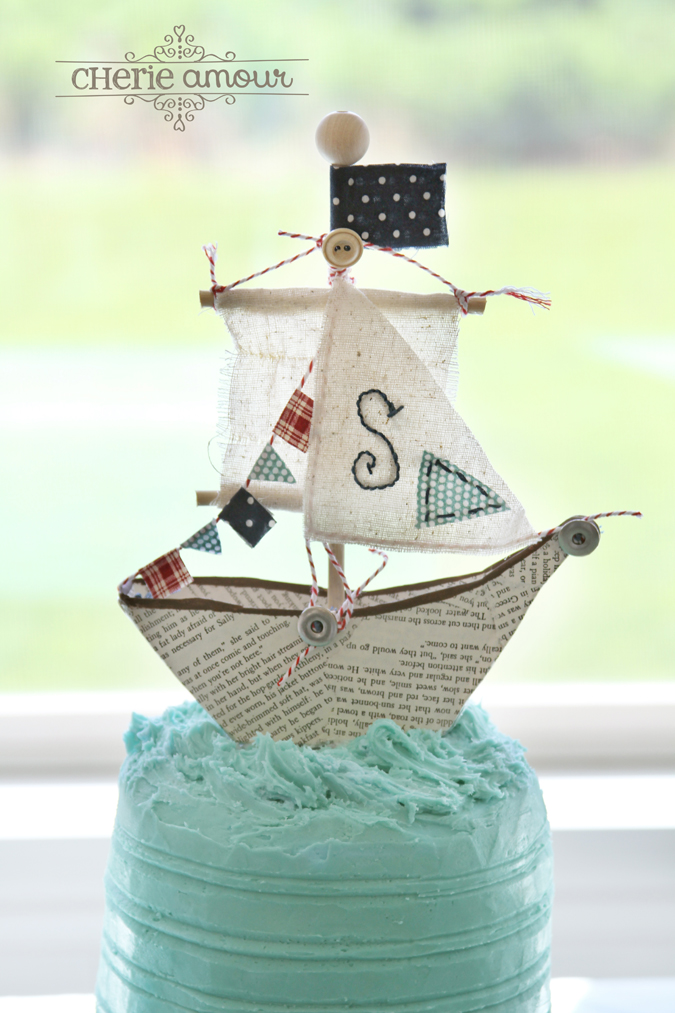 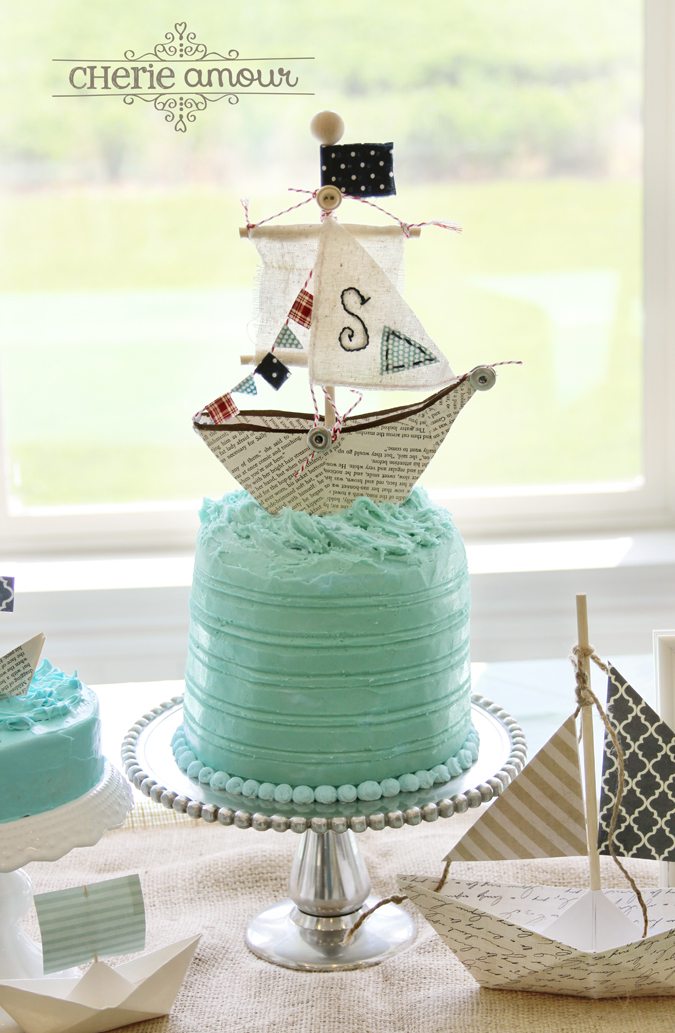 This "ONE" banner was a no-sew project.  I just cut a bunch of ribbon and strips of fabric and tied it onto some jute string.  The banner part I cut out of painters cloth, and painted the "1" with some acrylic paint.  After the paint dried, it wrinkled up the fabric a bit, but I didn't mind it.  If you were picky about the wrinkles, then I would suggest cutting out your number with fabric and sew it on like you would with any appliqué. 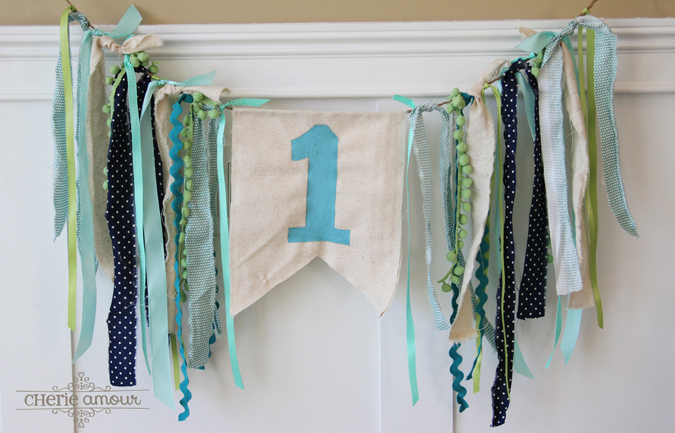 The party hat is made out of paper.  I just googled "party hat template", and found a pattern to cut out the shape I needed.  The #1 I printed from my computer and punched out with a scalloped circle punch, and behind that I just folded a piece of paper like you would make a paper fan, and taped the ends together to make a circle.  The pom pom on top I made from yarn... (Just wrap a  whole bunch around two or more fingers (depending on how large you want it) and have someone help you tie off the middle nice and tight; cut the looped ends, and wala, a pom pom!  I then glued some wide ribbon for the straps to keep it on my baby's head, and called it good.  I didn't feel like any further decorating of the hat was needed. 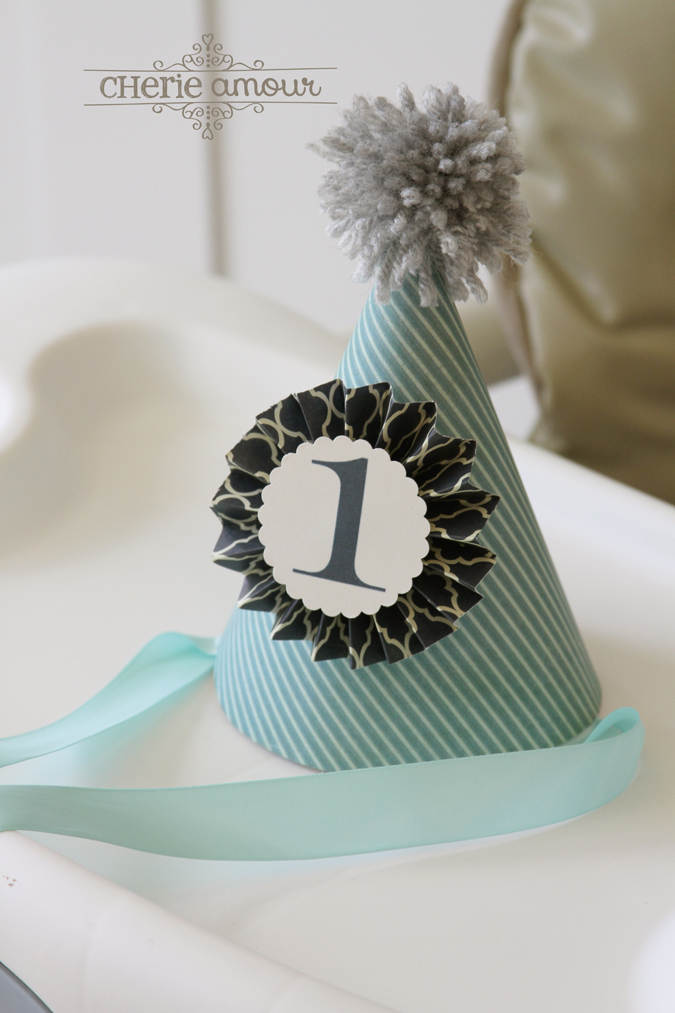 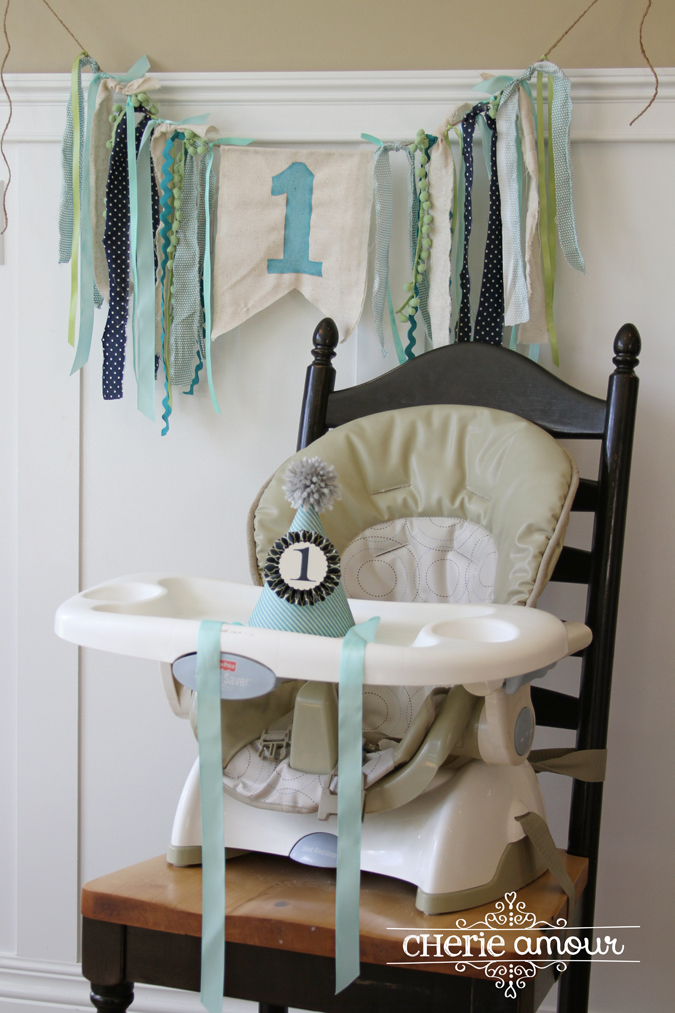 I got this idea for the "First Year Banner" from one of my many very talented sister-in-laws over at Catherina's Creative Corner  I hung it on the wall using clear command hooks. 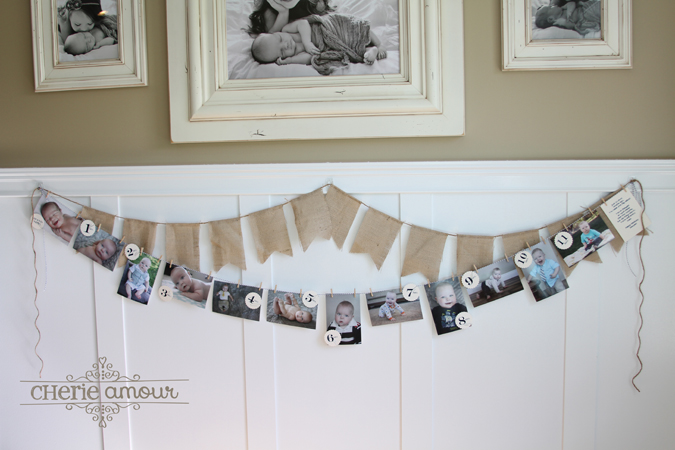 The burlap banner behind it, was another no-so project.  Cut the little flags out of burlap and hot glued them onto some jute string. 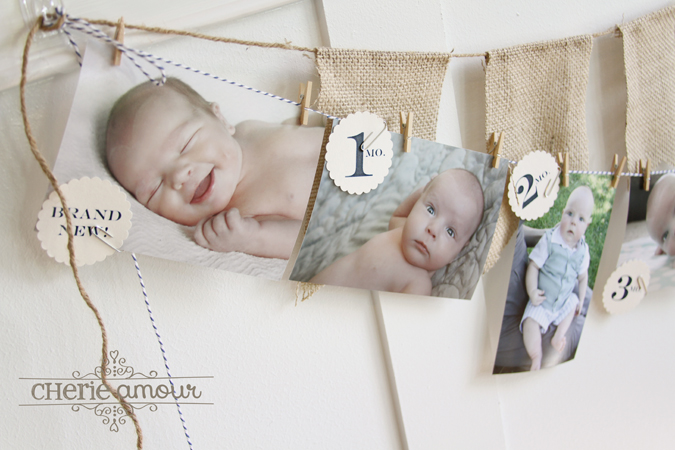 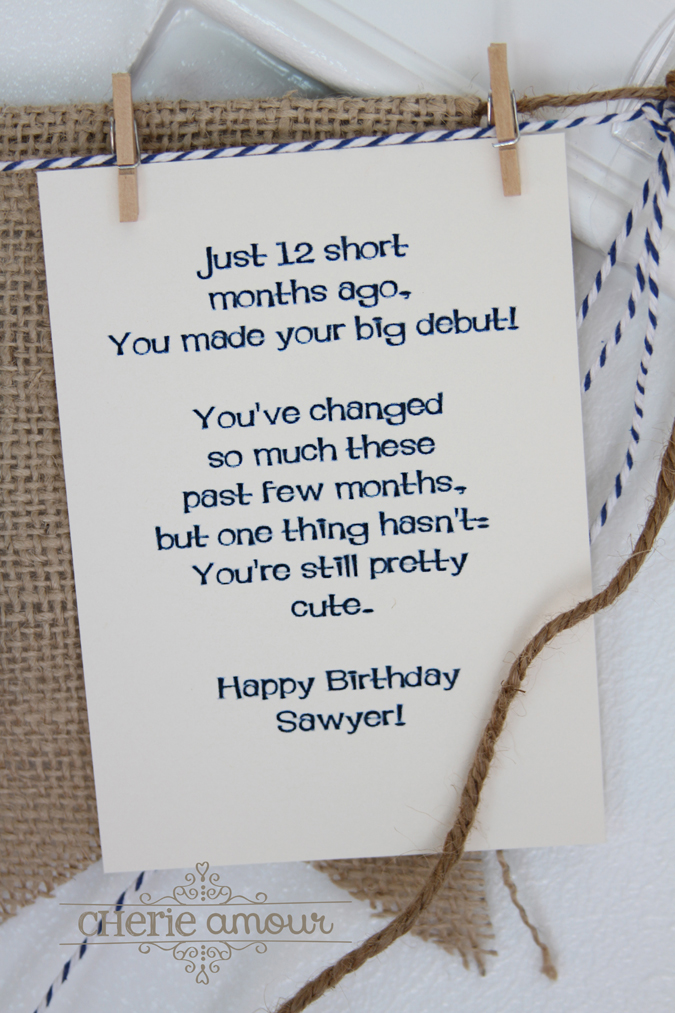 The little sail boat jello cups were such a fun idea, found HERE.  And the "Live Bait" are swedish fish. 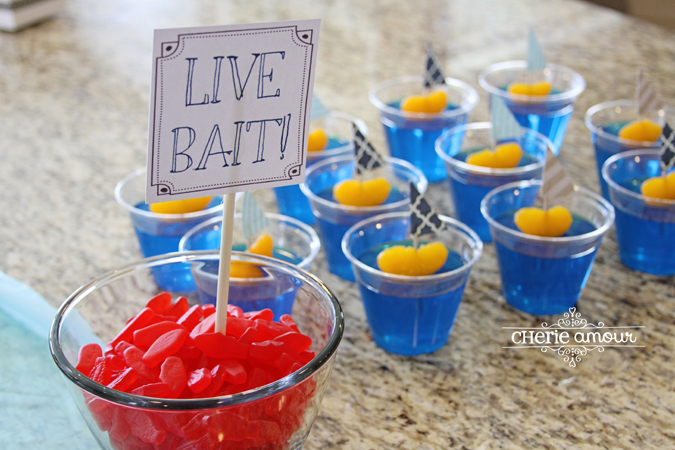